For most of us, luxury vehicles are modern hypercars like Fords, Lamborghinis, and Bugattis. But, lurking in the spotlights of car shows and luxury vehicle auctions sit cars that are so rare, unique, and luxurious that the vast majority of humans will never so much as look at them — much less drive them.

From propeller-powered relics to historic race cars — here are 5 cars that are so rare, you probably didn’t even know they existed.

Carmakers are getting savvier with their production techniques. We’ve seen General Motors and Ford use recycled materials like water bottles to help produce some of their car parts. Recently, we’ve seen an upsurge in lightweight thermoplastics — which can be lighter and sturdier than carbon fiber. But, how many of us have seen a car made entirely out of titanium?

Say hello to the Icona Vulcano Titanium, the boutique fully-platinum version of Icona’s Vulcano supercar. Titanium is a natural fit for a supercar. It’s lightweight, strong, and rust-proof. And, a few supercars out there have some small, lightweight titanium components.

The Icona is titanium. Each of these beasts takes over 1,000 working hours to produce, and apparently, it’s worth the wait. The supercharged LS9 V8 engine boasts a jaw-dropped 670 horsepower, and the entire car weighs slightly above 3,000 lbs — almost the exact same weight as their carbon-fiber version.

What’s the point? We’re not sure! Does there even have to be one? If you have the $2.7 million it takes to figure it out, let us know.

What if we told you that someone tried to marry a plane and an automobile back in the early 1900s… and it worked? That’s the story of the Helica de Leyat — the world’s first propeller-driven vehicle. The creator, one Marcel Leyat, created over twenty of these between 1919 and 1925.

They were lightweight, cheap to produce, and incredibly fast for the time. In fact, they could reach up to 100 miles per hour, a fairly pacey car for the time. Since these were all constructed by hand, very few remain today. And the ones that do are all in collectors hands.

The estimated value on these beautiful machines is $20 million — though it doesn’t look like anyone who owns one is willing to part with it.

Some cars are born to intrigue, others are born for function. The Porsche 917 K was born to race. This rocket ship of a car has a speed-crazed manifesto and a ravenous hunger for the race track. The 917 K was the star of Steve McQueen’s legendary racing film Le Mans (this one sold for $14 million at auction). And it was also the first Porsche to win Le Mans.

But, we aren’t just talking about any Porsche 917 K, we’re talking about the 004/017 body. A fateful meeting between John Wyer — the JW Automotive guru who built some of the fastest, hungriest race cars back in the late 1960s — and Rico Steinemann — Porsche’s iconic racing director — on March 21, 1969, would eventually lead to the creation of the world-beating Porsche 917 K 004.

This car came into the racing scene like a fever dream. In their very first race, both Porsches that Wyer created finished first and second. But, the 004 beat the previous all-time track record by over 190 miles. Eventually, the car was rear-ended, and the body was replaced with the 017 body — making the race car the Porsche 917 K 004/017.

It’s almost unfair to call the Bugatti Type 41 a car. This absolute beast of a machine has a 14-foot wheelbase, making it more like a luxury tank. Back in 2001, this was the single most expensive car in the world. At the auction, it pulled in $10 million (around $17 million today). Unfortunately, none of the remaining models have hit auction since then.

The original concept for this behemoth came when Ettore Bugatti lost a contract to build a military plane. Since he had already constructed the engine, he decided to just plug half of that engine in a car — bold decision that would cause some financial stress for his company. He made 7 of these (with plans to make twenty). 3 were sold. The rest sat at the Bugatti estate.

In total, 9 of these remain. One was destroyed in an unfortunate accident, so the 8 remaining units are the last pieces of this Bugatti war history.

Most concept cars exist on a piece of paper, typically used by design firms to showcase their skills. But, the  1955 Chrysler (Ghia) Streamline X “Gilda” is not one of those concepts. This car comes straight out of The Jetsons, with slick angles (where they exist), a bold stripe, and an unbelievable rounded body. It looks more like a flying saucer than a driveable car.

Italian designer Giovanni Savonuzzi commissioned this vehicle for Virgil Exner — the Chrysler design chief. The sleek lines and wonderfully bold design was named after the actress Rita Hayworth for her role in the Noir classic “Gilda.”

This is the kind of Chrysler that could only be the brainchild of someone in the 50s. The birth period of science fiction rags, rocket-powered spacecraft, and alien-obsessions obviously contributed to the design on this amazing machine. The cost of this machine is unknown. It was purchased in 2001 by a Californian for under $200,000. But, it has been completely rebuilt (with original parts) since then. So, who knows what it would fetch at auction.

Looking at these super rare cars is always fun. But, let’s be honest — most of us won’t ever own a one-off supercar. They’re simply too rare. But that doesn’t mean that you shouldn’t protect your current investment. Whether you’re driving a Ford GT hypercar or a classic Mustang, SLiPLO Skid Plates can help you protect your bumper from damage. 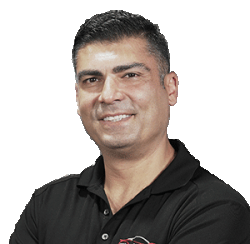 Owner/Founder at Sliplo
Andy Soleimani A.K.A. Dr. Scrape is the creator and founder of SLiPLO Universal Bumper Scrape Guard who has had the good fortune of helping to protect some of the most expensive and exclusive exotic cars in the world.

After spending nearly two decades working in automotive protection and restyling for multimillion-dollar vehicle brands, Andy knows what an enthusiast with a new car truly craves when it comes to protecting and customizing the look of their vehicle. It’s how well you connect with the idea of the heart-beating car enthusiast and bringing their vision into reality.

Andy’s award-winning designs have landed on the cover of Yahoo and have been seen by millions of people on social media channels around the world. His designs have won awards from the likes of Avery Denison and Roland. Andy’s work has been featured on cars like LaFerrari Aperta, Bugatti Chiron, Bugatti Veyron, Pagani Zonda Cinque Roadster and much more.

Andy is also the founder and CEO of Sticker City.